Coalitions are a social and competitive aspect of Magic: the Gathering Puzzle Quest. Coalitions compete against each other for additional rewards from coalition Events.

A single coalition holds up to 20 players.

Joining or starting a coalition 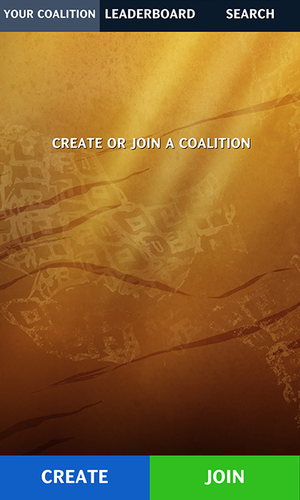 The option to create or join a coalition is provided after pressing the "Coalitions" button on the in-game main menu. Players can only be part of one coalition at any one time.

Coalitions have the following features.

In-game coalition chat: Being in a coalition will allow a player to send messages through an in-game chat to all the other players in their coalition. The chat will also notify players of significant coalition occurrences like a player joining or leaving the coalition.

All-time score: The total score each member has accumulated over all coalition events is provided in an all-time score table. If a player leaves a coalition, their all-time coalition score is reset to zero.

Customizing the Coalition: The leader can customize the logo and name of the coalition, or set the coalition to be public or private. Each time a customization is made, the leader must pay a 50

Kicking a Player: The leader can eject a player from the coalition at any time, including during coalition events.

Changing Leadership: The leader can select a player in the coalition to pass on leadership responsibilities to. If a leader leaves a coalition, the remaining member with the highest all-time coalition score automatically becomes the new leader.