Like Mana, Loyalty is a resource gained during a game, which may be spent during the same game.

Rather than powering up Cards, Loyalty powers up a Planeswalker's Loyalty abilities.

) on the gem board provides an amount of loyalty equal to the number of gems matched. In addition, every match of colored gems provides +1 loyalty. The maximum loyalty which can be accumulated at a time is 30.

Certain cards can also provide loyalty to your Planeswalker.

Each planeswalker has three abilities, commonly referred to as their First, Second, and Ultimate abilities.

Typically, each subsequent ability costs more loyalty. Using an ability subtracts its loyalty cost from your loyalty pool. Players may use their First ability as soon as enough loyalty is accumulated, or keep building up loyalty further for the Second or Ultimate abilities, which are generally more powerful. 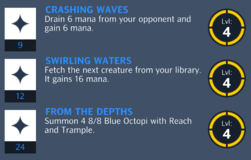