Booster Crafting, or just Crafting, was introduced in December 2017 as a way for players to indirectly convert duplicate cards into new cards, in a semi-targeted manner. Duplicate cards get converted into Mana Orbs ( 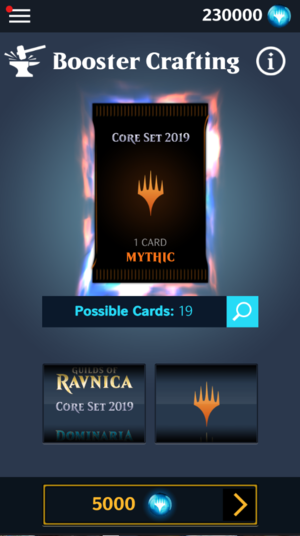 Crafting allows you to choose the set and the rarity to craft. The magnifying glass allows the player to see the list of possible cards which can be crafted from the selection.

A player may not craft cards from a set and rarity in which they own all the cards.

On the other hand, Legacy sets cannot be targeted individually; instead, a crafted Legacy card may come from any Legacy card set.

Legacy and Origins cards can be crafted more cheaply than Standard cards. Conversely, the newest craftable card set is more expensive to craft.

Common, Uncommon, Rare and Mythic cards can be selected for crafting for increasing amounts of Orbs.

* Masterpiece cards are only craftable via a VIP reward

Orbs are earned from duplicate cards. Duplicate cards are automatically converted into Orbs and Runes. 50% additional Orbs are provided if the duplicate card is from a set which cannot yet be crafted.