This page describes the types of Gems you can encounter on the Gem board during a game of Magic: the Gathering Puzzle Quest

Matching colored gems (making 3 in a row of the same color) gives you 1 Mana per gem, extra mana equal to your mana bonus in that color, and 1 Loyalty.

Matching loyalty gems gives you 1 Loyalty per gem, but no mana.

Loyalty gems generally can't be converted into other gem colors or types unless explicitly specified.

When a support card or support Token

Support gems enter play with a numerical shield value. The shield value represents the durability of the support.

The side of the gem on which the shield value is shown corresponds to the player who controls the support.

Support gems can't be converted into other gem colors or types.

Support gems which are reinforced gain a circular icon around the shield value.

have a large glowing halo during the controlling player's turn.

Support gems can be created by:

Matching or hitting a support gem by a match-4 reduces its shield by 1. If the shield goes to 0, the support is destroyed. Some supports are indestructible, i.e. they lose no shield when matched; they can still be destroyed by card and Planeswalker abilities. Others regain shields after losing them to a match. Fractals gain shield when matched.

Support tokens are created by effects rather than being cast as a card. When destroyed, support tokens do not enter the graveyard; they just disappear. Support tokens have the same appearance on the gem board as support cards, and unless otherwise specified are affected by the same effects and abilities that affect support gems cast as cards.

are a special type of support card representing planeswalkers. They have a different appearance on the gem board to card or token supports.

Vanguard cards enter the gem board as Vanguard support gems when played, and are reinforced if already in play when played again. Vanguards have passive and active abilities which their controller can benefit from.

By default, effects which work on general supports don't work on Vanguards; Vanguards are only affected if it's specifically stated on the card or effect. For example:

Matching activated gems destroys them and produces an effect which depends on the type of the activated gem. Activated gems can also be destroyed with abilities, whether cast or on the board (such as Ignited gems) or used by Planeswalkers, which often destroy square gem blocks of various sizes (eg 3x3 or 5x5).

Activated gems are created from existing colored gems, and keep their color after becoming activated gems.

Activated gems can't be converted into other gem colors or types.

While most activated gems have no effect if matched by the opponent, the Puzzle Masters set introduced a new type of Activated gem that always does : Improved gems.

Tapping an activated gem will cause a glow to appear on or around any source that created it present on the gem board, or a Planeswalker's portrait if their ability was the source.

Improved Gems were introduced with the Puzzle Masters set. They always trigger with an effect for the player that matches them. Only the Blue Deny

and Time Bubble gems are unequivocally detrimental to the enemy that matches them. 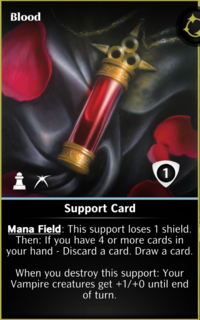 supports trigger their effects when any gem on the Gem board is matched adjacent or diagonally adjacent to the support.

supports trigger their effects like a Mana Field, but the effects, usually converting gems to that color or increasing that color's mana bonus, are dependent on the color of gem matched.

Blood is a token support created by other cards or Planeswalker abilities. When a gem in its Mana Field is matched, it loses a shield, and then Discards a card and Draws a card.

Event supports are a means of varying the gameplay with special rules, abilities, restrictions.. They are always invulnerable to having their shields reduced by matching, either by being Resilient

, and always getting their shields back, or by having infinite shields. Almost all are also invulnerable to destruction by cards and Planeswalker abilities. An exception is the Atogatog support in the Seize the Day. 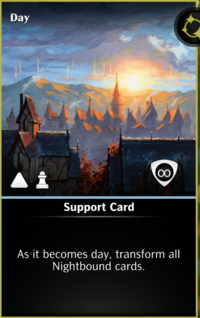 Day and Night supports are like Event supports in that they are invulnerable (Day and Night cannot be destroyed by any means), automatically added to the gem board, and add special effects to gameplay.

The Day support is always added first: whenever a Transform

card (that can change back; Disturb

cards can only Transform into their flip side) is Summoned, or when Arlinn, the Pack's Hope begins the game, or when Teferi, Who Slows the Sunset or Arlinn Kord use their abilities. 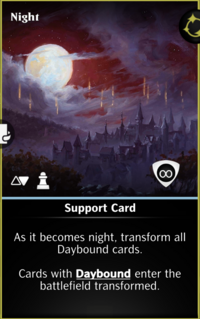 card Transforms to its Nightbound

side if played at Night, or at the end of any player's turn during which no cards were cast (which is what makes it become Night).

Anytime it is Night, and a player casts two or more cards during their turn, it becomes Day at the end of that turn.

Either of these changes, from Day to Night or vice versa, trigger Dayshift

cards, and one of the support cards is replaced by the other.

Void gems are empty bubbles created by cards with the Ingest ability.

Cards with the Process ability require void gems on the board to work.

ability, and +1 Loyalty. If you have no Devoid cards in hand, matching devoid gems gives no mana. Void gems cannot give extra mana from any coloured mana bonus.