From mtgpq wiki
(Redirected from Planeswalkers)
Jump to: navigation, search 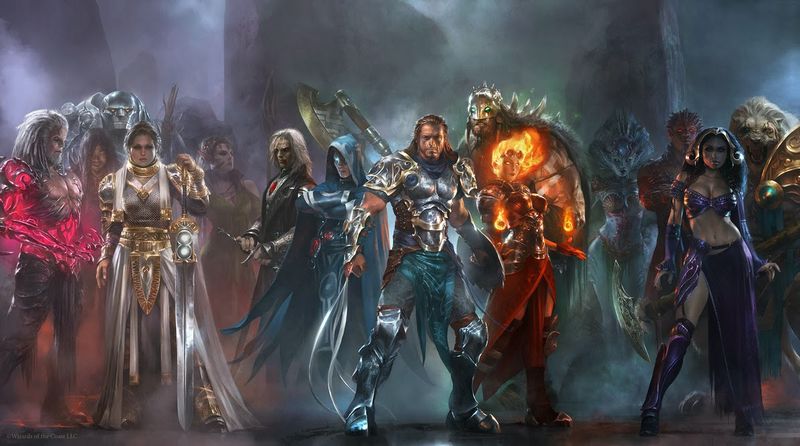 Players in Magic: the Gathering Puzzle Quest take on the role of a Planeswalker, a powerful being. Planeswalkers have diverse characteristics and motivations. Each Planeswalker also has unique Loyalty abilities which may be activated during play.

Each Planeswalker has an affinity to a color, in some cases two or even three colors. A Planeswalker's deck may generally contain only cards including an affinity color, or colorless cards. The upper limits on the number of Creature, Spell, and Support cards in the deck are also Planeswalker-specific.

Planeswalkers begin at level 1. Planeswalker levels may be increased by spending Mana Runes (

), to a maximum of level 60. Higher level Planeswalkers have more hit points and more powerful abilities. Generally, the more colors a Planeswalker has affinity with, the more expensive they are to purchase and level up.

Origins, Battle for Zendikar, and Oath of the Gatewatch Planeswalkers all have lower mana bonuses than this, as do many others before the Ixalan set. Unusual mana gain is part of the design of colorless walkers, and there is no easy rule to define their bonuses. There are clear benefits to playing Planeswalkers with high spike bonuses with mana conversion, and when playing without mana conversion, to use Planeswalkers with a balanced spread of bonuses. Some Planeswalkers have abilities that benefit their mana bonuses; notably Karn, Scion of Urza, Sarkhan Unbroken, Tamiyo, Field Researcher , and Ugin, the Spirit Dragon.

Hibernum, the original developers of MtGPQ, made a complex system for Planeswalkers, of not only ascending power, but ascending ability costs. All Planeswalkers had abilities straight out of the gate, at level 1. Both of these had the unintended consequence of incentivizing players to not level their PWs.

Oktagon, from their first set of Ixalan, made a uniform system for PW leveling. Since then, all Planeswalkers released obtain their abilities when the units digit of their level is 6 or zero : 6, 10, 16, 20, 26, 30, etc. Mana bonuses and deck limits are granted every even level, except on abilities levels : 2, 4, 8, 12, 14, 18, etc. And an amount of HP is added every odd level, or Planeswalker Regeneration : 1, 3, 5, 7, 9 etc. With more recent Planeswalkers, the HP added is lower at low levels, presumably as an additional incentive to level up.

A summary of each Planeswalker is below. The listed mana bonuses, deck limits and health are given for planeswalkers at their maximum level.