You've Found An Entrance is a Legacy PvE Event released in August 2021 along with the Adventures in the Forgotten Realms card set. It changed from Standard to Legacy in October 2022 (v5.9).

The node structure is designed to resemble a D&D dungeon, with a single path taken through multiple possible routes. Completing an objective on a node unlocks one of two possible nodes to encounter next (except for the first, which only leads to Node 2, and the last). The player traces a path through the dungeon of the event based on which secondary objectives are achieved. 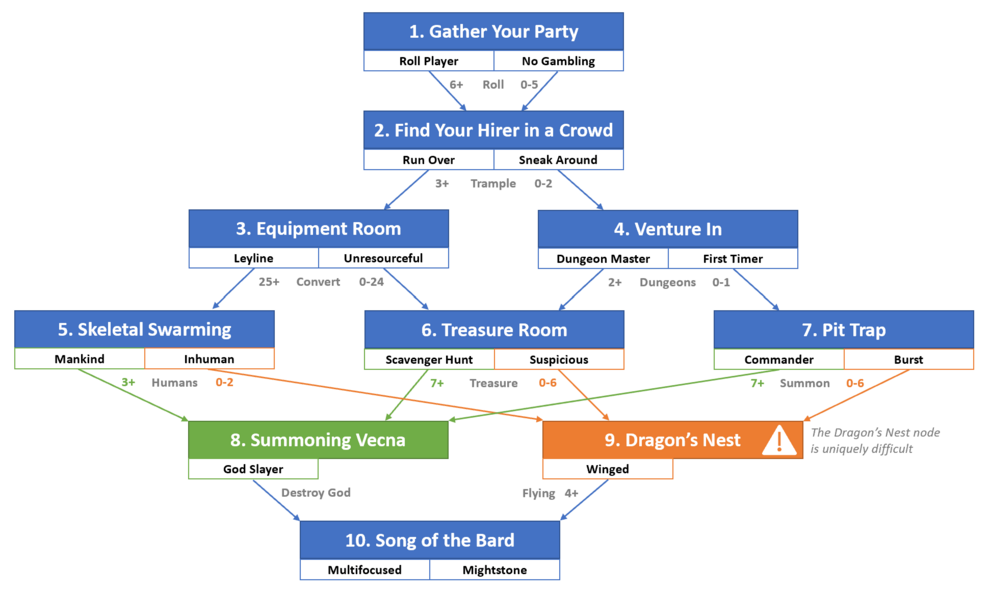 Each node offers a choice of two possible subsequent nodes, by way of achieving one of two mutually exclusive objectives.

All nodes are unlocked after Node 10: Song of the Bard is completed. Whereupon, unlike most events, winning on a node that has already been beaten continues to earn ribbons.

The deck lists below may not be complete. Conversely, there is a wide sampling of evidence that the opponents' decks may not always be 10 cards.

Node 2: Find Your Hirer in a Crowd

Song of the Bard

"At the beginning of your turn, create a random card used by the opponents of the previous encounters on the battlefield under your control. Then, if that is a creature card, give it Haste

: At the end of your turn: destroy this card."

Because only one node is available at a time until the final node is beaten, if a node is too difficult for a player to complete (for example, Node 9: Dragon's Nest), they will get stuck there. To avoid this, players can determine in advance which objectives need to be achieved to get their preferred path through the dungeon.

All paths that do not go through the Dragon's Nest go through Vecna; he is a Zombie as well as a God, so the most common kill spell of all, Origins' Cruel Revival, will not work on him. Fleshbag Marauder, and almost all other removal that actually Destroys rather than Exiles, will. Cards that “return target creature to owners hand” also work, since Vecna is also a token.