Seize the Day is a block-restricted PvP event introduced in March 2020, along with the release of the From the Vault: Odyssey card set.

The event has an entry fee of 15 Mana Crystals.

On some nodes, at the beginning of a battle, the player can choose a support card to start play on their side.

At the beginning of a battle, the player is shown four of the following Atog support cards at random. They choose one of those four to start play on their side, and the opponent chooses one at random.

Under certain conditions during the game, a powerful Atogatog support can appear. 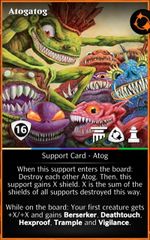 Node 3 (right): Fight For Your Life

At the beginning of the battle, the player chooses one of the following arena support cards to start play on their side, and the opponent chooses one at random.

* The JUD Reward Pack contains one of the following cards: